What is Therbligs Motion Study?

Therbligs is a motion study technique that is used to analyse the motions involved in performing a task. It can also be termed as a micromotion study. Micromotion studies are generally done for operations or workplace tasks which have low cycle time but high repetition. There are 18 kinds of elemental motions which will be analysed during the study.

Therbligs motion study essentially allows us to identify the individual motions associated with performing a task/operation and helps classify them into three types. Motions required for performing the operation/task, motions that slow down type 1 motions and motions that do not perform any task or operation.

This study allows us to utilize or eliminate even split second of wasted time. It was invented and refined by Frank and Lillian Gilbreth, between 1908 and 1924. 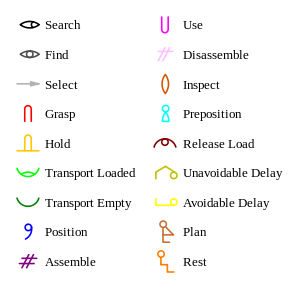 1 Search (Sh): Motion of the eye or hand in search of an object.

2. Find (F): Mental reaction at the end of Search motion. Is not frequently used.

3. Select (ST): Choosing an object from a group. Part of search motion.

4. Grasp (G): Worker grabbing an object with his active hand. Can be ended with Hold, Use or Transport loaded.

5. Hold (H): Holding an object, considered as an extension of grasp. Can be ended with Use or Assemble.

6. Transport loaded (TL): Moving an object. Can be ended with Release load, Use, or Assemble. Can also be termed as Carry.

7. Transport empty (TE): Motion in between Search and Grasp. It is the motion of reaching out to an object with an empty hand. It is now also termed as Reach,

8. Position (P): Placing the object in the correct or defined location.

9. Assemble (A): When two objects are joined together. Can be ended with Transport loaded or transport empty.

10. Use (U): Used to indicate a tool and it is the motion of using the tool in its intended way.

11. Disassemble (DA):  It is the opposite of assemble. The motion of separating joined components.

12. Inspect (I): Comparing the object with predetermined standard. Used to determine the quality or other characteristics of the object.

13. Preposition (PP): Repositioning an object in a position or orientation for its next operation

14. Release load (RL): Motion of releasing an object when it reaches its destination.

15. Unavoidable delay (UD): Worker inactive time or waiting motion due to factors not in worker’s control.

14. Avoidable delay (AD): Worker inactive time or waiting motion even when factors are under worker’s control.

15. Plan (Pn): Mental function that occurs before deciding a course of action.

16. Rest (R): Motion usually occurs due to fatigue, to help overcome it.

1 Motions required for performing the task/operation:

2. Motions that slows down Type 1 motions:

3. Motions that do not perform any task/operation:

The concept of Therblig Motion Study is used in various present-day systems and fields, like the RULA system, field of Human Factors Design, Ergonomics, and is used even in the field of Robotics and interactive computer systems.

With many yet to be explored applications for this system it can be seen that it has limitless usage in multiple fields and is still a work in progress.